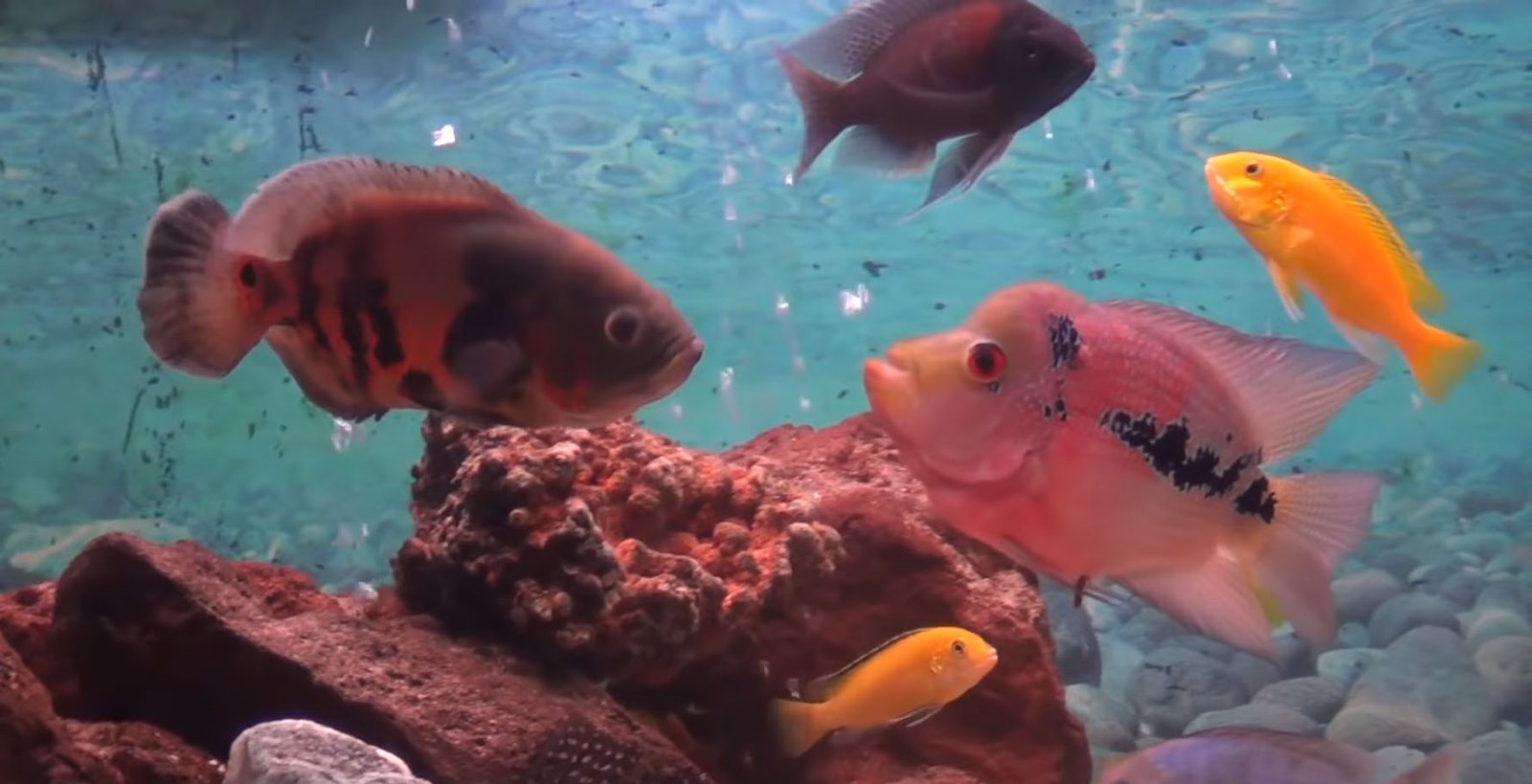 People are aware of the Flowerhorn fish and its behavior. An adult Flowerhorn fish is one real tough fish. There is no scale to measure the level of aggressiveness a pet Flowerhorn would have. So people prefer to keep it in a separate tank or completely avoid introducing new fishes in the same tank.
The fishes which are compatible with Flowerhorn are Jaguar fish, Oscar Fish, Leopard pleco fish etc.

Oscar fishes are enough compatible with any other fish it is also an attraction for the buyers who are fond of buying big fishes. Oscar fish has great behavior and also they are very interactive. You need to add the Oscar fish beforehand, as Flowerhorn would not let the Oscar fish cover its territory and also not let it eat the food.
Once the Oscar has settled in any new tank completely you can think of shifting the Flowerhorn in the same. Just assure that both are bigger in sizes and cannot harm each other on severe extent if caught fighting. If the Flowerhorn fish is bigger in the size it may bite and hurt the Oscar fish. Depending upon the aggression scale one will not always judge if the Flowerhorn is going to act wild or sober.
However, if the Flowerhorn is mature and strong enough it can also kill the Oscar fish at any time for no reason. So, therefore, one should take care of all parameters before making them tank mates.

At times it becomes much aggressive banging its head to the glass top of the tank that would create a mess in the tank making it muddier and dirty. Also, their digging habit can be a reason for the tank to get messy so frequently. It often can break someone’s sleep if it makes loud noises created by digging or constant banging.

Not just fishes but the behavior of this fish with other mammals such as turtle has been not very compatible. Turtle always tends to go inside its shell because of its aggressive behavior. The fish has sharp teeth and can bite other fishes which can cause severe pain to other fishes. But it completely depends on the behavior and nature of the Flowerhorn. If one has a big size tank with a lot of space it can also live and let other fishes live peacefully.

Is Flowerhorn Fish capable of living with other fishes in the same tank?

As everybody knows how aggressive they, this question totally relies on the behavior and its lifestyle pattern. These fishes are too much insecure about their territory and food. Therefore, it’s more preferable to keep this fish separately in the tank and also it has no problem in living separately. It will bite other fishes and even a human feeding the food. One should also take care while maintaining cleanliness.

However, this fish can survive with other species up to an extent. The tank should be very large so that it will get its own personal space and would not rush to mark its territory in aggression. Only bigger size tank mates are compatible with Flowerhorn fish compared to the small fishes. These fishes irritate the big fish and having no reason it also may kill them.

Oscar fish is a lake water fish which mainly belongs to South America and the Amazon river. It is known as the smartest fish, it also has some different trails which are very likely to humans. It is smart to identify its owner and so it is an obedient pet.
It won’t bite and cause harm even if one puts his fingers in the tank. It is never always hungry and tempted for food. But still, it is a gentle reminder that one should make a tight fist and then put the hand inside the tank which will not confuse the fish. Also won’t move the hand in any motion that leads to making the fish feel of having some danger near it.

After a few minutes of waiting, the Oscar fish will find no trouble around it and will roam freely in the tank with the hand inside it. Also, for sure if the hand inside the tank has no soap residue or detergent on a surface of the palms. One more thing to remember while touching the fish, touching should be avoided to the fish very frequently as it will result to take protective membrane of the skin which will cause some severe disease.

Some disadvantages of keeping both the fishes in the same tank:

• The total cost of all expenses that were bared for these two particular fishes, increases gradually as per its diet and lifestyle pattern.
• The variety in different types of food and health supplements can be seen as per the requirement of the specified parameter of health and other issues.
• The filtration of the water becomes very frequent as the water becomes dirtier than having just one single fish.
• Maintenance and other expenses such as buying tank accessories will be of more frequent.
• One has to always refer the standards and add-ons that have to be done in the tank before filling the water.
• No small size tanks won’t be capable enough to use along with changing the materials and filter.
• Also if big size tank is not available one should not take a risk of keeping them together in the smaller tank.

Breeding of both species:

One needs to buy a spacious tank so that the couple fishes can play their hide and seek game at the time of mating. Here the female will hide in the covers and so the male won’t find her that easily.
Mostly the female will act of being not ready for breeding but this won’t stop the male from harming her. After the spawning one can divide the tank if the male turns to be more aggressive that will help the female to hatch the egg without any trouble. A partition can be done simply by fencing net.

It is preferable to keep the female away more the male fish so that at the time of the baby Flowerhorns needs proper care they can be given separate food with no snatching away or any wear and tear. The baby Flowerhorns has to be given small tiny shrimp eggs and also some fish flakes.

It’s a really hard process to breed Oscars than any other types of species from lake water. It is difficult to find two Oscars that are ready for mating as per their liking for each other. The minimum age for spawning is 2 years or above as before that they are considered to be juveniles.
One can also buy an already spawned Oscar fish which is ready to lay eggs or can also buy two spawned Oscar fishes for fast results. These two fishes will likely mate in every alternate month.  The female Oscar generally hatches eggs in 2 hours prior to being laid. The couple can also eat their own eggs if they become upset and aggressive at a point. Or can simply consume them because of not being fertile. It is not a matter of surprise, it can happen very often.

Thus one cannot just randomly decide if the two species can live together or not. There is a lot of research going on both the fishes to find the best partner according to their behavioral type and aggression level.
Both the fishes can be kept together as tank mates but only if there is supervision given on it which would help to separate them if they start attacking each other. Therefore, one needs to follow certain guidelines while making them live together.

Some FAQs related to Flowerhorn and Oscar Fish:

1. How can you tell a male Flowerhorn from a female?

2. Which fish easy to care? Flowerhorn or Oscar?

The care of Flowerhorn is quite easy as this fish is not demanding and it is an enduring one. While on other hand Oscar is messy fish so you need to maintain the fish tank frequently.

3. Who is more adaptive to change?

It is a stuff decision to come upon as both of the fishes have a different comfort zone and different level of tolerance to other fish. But ideally, small fishes as tank mates are not suitable at all as. As even the more adaptive, Oscar fish would get irritated by the small fishes and can kill them on the spot.

ABOUT US
Flowerhornfarmin is a Blog about the Flowerhorn Fish. We try to provide as much information about farming, feeding, and growing of this fish. This Blog is destinated to the lovers of this awesome fish.
FOLLOW US
Buy your flowerhorn online now