Flowerhorn
Home Information Where do Flowerhorn fish come from? 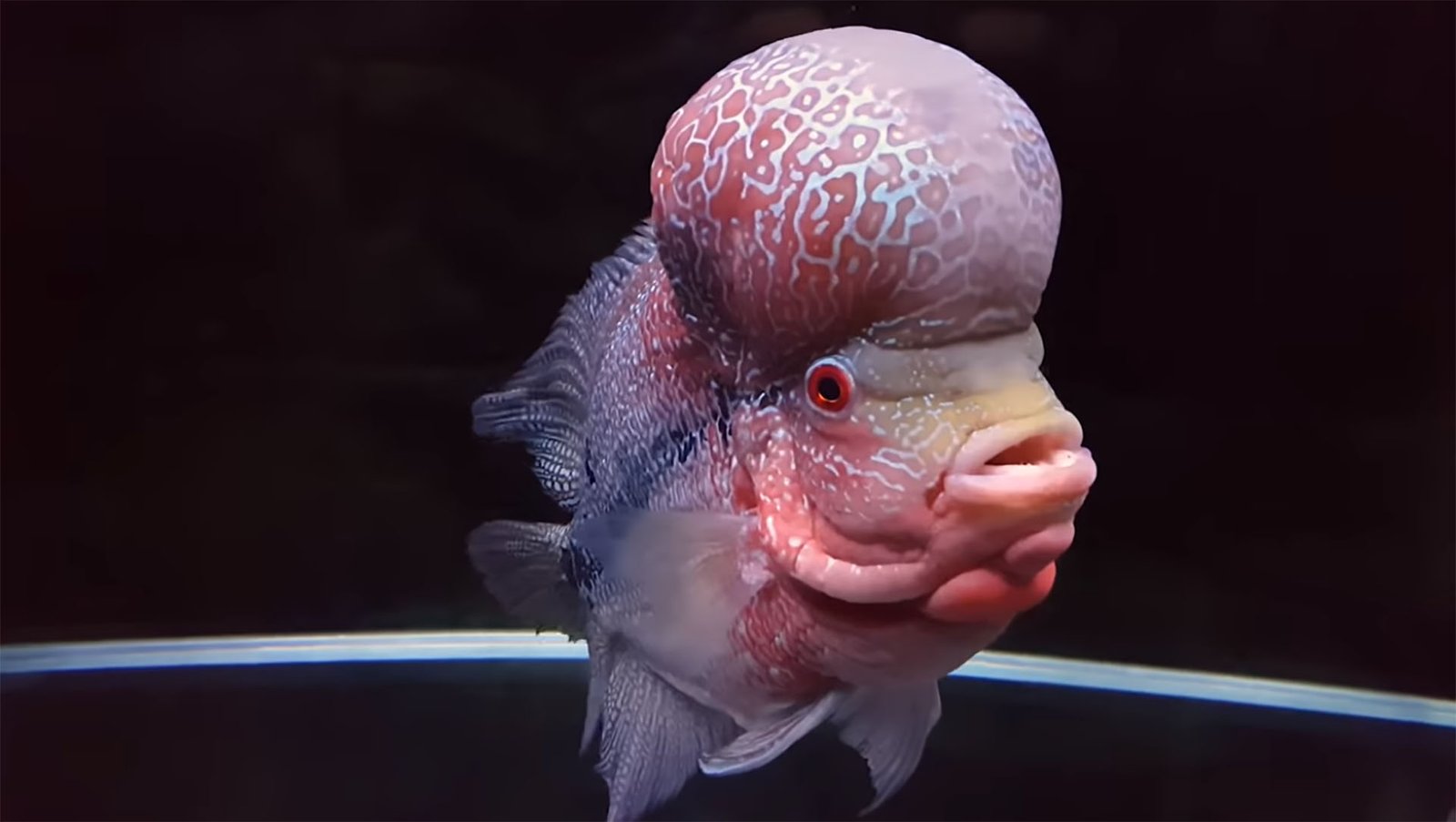 There is a huge demand of Flowerhorn fishes as it is known for its attractive big curvy head and vivid colors.

If you have ever wondered, where do Flowerhorn fish come from? We should let you know that Flowerhorn Fish comes from a cichlid Family. It has several types as King Kamfa, Kamfa, Albino FH, Faders etc.
As it is an exotic and delicate breed on should always have a check before buying it. One can look for the size, behavior, color and the hump on the fish which can make it look unique than other Flowerhorns. These are some basic characters one can keep in mind while taking a mature flower horn fish. But if one wishes to buy an infant or a baby flower horn she needs to take of its growth pattern and health so that it can be a full power pact adult at the end.

Though Flowerhorns are great eaters and one can feed it anytime, any day. But one needs to feed the fish mandatorily twice. One has to just put the fish food in the tank. But, feeding a baby flower horn is completely a different scenario. One needs to be very careful while selecting and getting good quality food which is healthy and nutritious.

History and Glimpse of the origin of Flowerhorn fish:

In 1993 a fish known as Amphilophus was imported along with the old Paratherap of the Asian countries.
In 1994 these several species are crossed breed among all such types. This cross breed species were not so famous and renowned. They were kept in a very good condition by the Fishermans and creators of the fish. After many years the cross-breeding increased and developed four species of cichlids from different regions of Central and South America. Many different species were also introduced at the same time.

In 1996,  Blood Parrot also known as Parrot of blood are crossed still more with another hybrid fish called Red God of the fortune (Red Mammon called like this by its high front by its resemblance to the hat that the Red God of Fortune use to wear) with what produces a unique race, known as 5 colors of fortune. It tends to become very popular at the time.

Particular about the breeding was carried until 1998 where two more colors got added in the already created previously species called Greenish gold tiger fish. This hybrid was then taken to the USA where it was continued crossing along with the Parrot of Blood originating the primary version of Flower Horn called Hua Luo Han.

In the United State of America, at that time the total numbers of breeds were only two, which were mainly kept for trading. They were the Golden Base and the Flower horn fish.

The time came in 1999 when more cross-breeding was done to get more variety of fishes. it is also told that the Herichthys Carpintis, Flowerhorn fish already had a variety of kinds.

The Pearl with silver and white strips/spots and those which were plain. Another breed, the Golden Base also was used for further crossing and a new race was formed due to the dominant genes of Amphilophus Citrinellus, the colors fade leaving a smooth golden skin to these were known as Fader (by fading or fading). The Pearl Flower Horn rapidly reached to the fame named Zhen Zhou (ZZ).

So now in total, there were almost four breeds that were available for trading. They were all Flower horn, Zhen Zhou, Golden Base, and Fader. Then after these crosses multiplied which originated new races forming a problem for giving a definite terminology to any species.

Evolution of Flowerhorn fish in the 2000s:

Later in the 2000s, Flower horn Kampa came into existence, which was obtained by hybridization of any old Paratheraps. This species had new characteristics: shorter lips, broader tails having fan shape, less bulging eyes, and bigger size nuchal humps.

These are some of the known man’s creation which is present only in the wild as they were released and not trapped in any observatory just like the blood parrot fish. They have become renowned and were primarily originated from Malaysia, Thailand, and Taiwan.

They have white or occur yellow colored eyes, along with a fan-shaped tail, also have a head bump with a good color mark, less bulged eyes and very similar to Zhen Zhu. Its body is very huge and square in shape compared to other fishes. Also, the head bump is a bit slightly irregular in shape than a perfect round or oval head bump of Zhen Zhu.

Further classification of the Flowerhorn Fish:

The species of Flowerhorn fish is classified as the genes which are similar to Cichlasoma. They are from South America and came into existence by breeding the selected specimens. There are even mixtures with the fish “blood parrot”.

This fish is very “fashionable” in Asia, where those who follow the indications of Feng Shui adopt it frequently. The foundation is, according to the experts, that the bigger the characteristic bulge in your head, the more prosperity, luck, and longevity will bring to the possessor of the fish.

Addressing the aspect that most interests us who care for the fish in our aquariums, we will detail their conditions required for healthy development in the aquarium. The Flower Horn lives in warm waters, the recommended temperature for its life in the aquarium is between 28o and 31o C.

They reproduce quite easily, although at this time they become even more aggressive. The eggs are deposited on a flat and preferably vertical surface, the laying will be around 1,000 eggs and the female will take care of them while the male will watch the territory.

The hatch will hatch 3 days after spawning and will be taken to a large hole that your parents will dig. After another 5 days, the fry will be able to swim freely, they will have consumed their yolk sac and it will be time to provide them with live food. It is convenient to separate the male during these days to avoid serious problems with the female.

The Flower Horn fish is not very well known but it is one of the species most appreciated by those who own it since it is a hybrid fish mixed between several selected specimens and whose particularity having a bulge on the head which is attracting and all of them came from Malaysia.

This fish is very appreciated by all who follow the laws of Feng Shui and is that followers say that the larger the characteristic bulge in your head more prosperity, luck and longevity will provide the possessor of the fish.

Behavior and Features of Flowerhorn Fish:

Regarding their care, the Flower Horn is a fish that acclimates very easily to its environment, although it is a very aggressive and very territorial species, which is why it is recommended that it be alone in the aquarium or with similar specimens and with an aquarium of large proportions so you have your living space. It can measure up to 40 cm and its force can displace decorative objects.

Following are some of the Q&A which will usually come to your mind:

1. What is the size of the Flowerhorn fish at present? What is its lifespan?

Flowerhorn fish can development approximately having the length of 12-14 inches which varies according to different species of the Flowerhorn fish.
These fish can also extend up to 16 inches at times if the adequate amount of food and nutrition is provided along with proper care is taken for its development. They can live up to 10 – 11 years with all the measures taken for a healthy and good developing growth. More details here.

2. How can one know the sex of the fish?

3. What temperature and water quality is best suited for these fishes?

Flowerhorn fishes are best suited in clean water and won’t be able to manage in dirty or muddy water. Though it itself creates a lot of mess, so one needs to take care of regular cleaning and filtration of water.
As it is a tropical fish, its behavior tends to be a bit aggressive compared to other pet fishes. The Flower Horn lives in warm waters, the recommended temperature for its life in the aquarium is between 28° and 31° C.

ABOUT US
Flowerhornfarmin is a Blog about the Flowerhorn Fish. We try to provide as much information about farming, feeding, and growing of this fish. This Blog is destinated to the lovers of this awesome fish.
FOLLOW US
© Flowerhornfarmin all rights reserved
Buy your flowerhorn online now