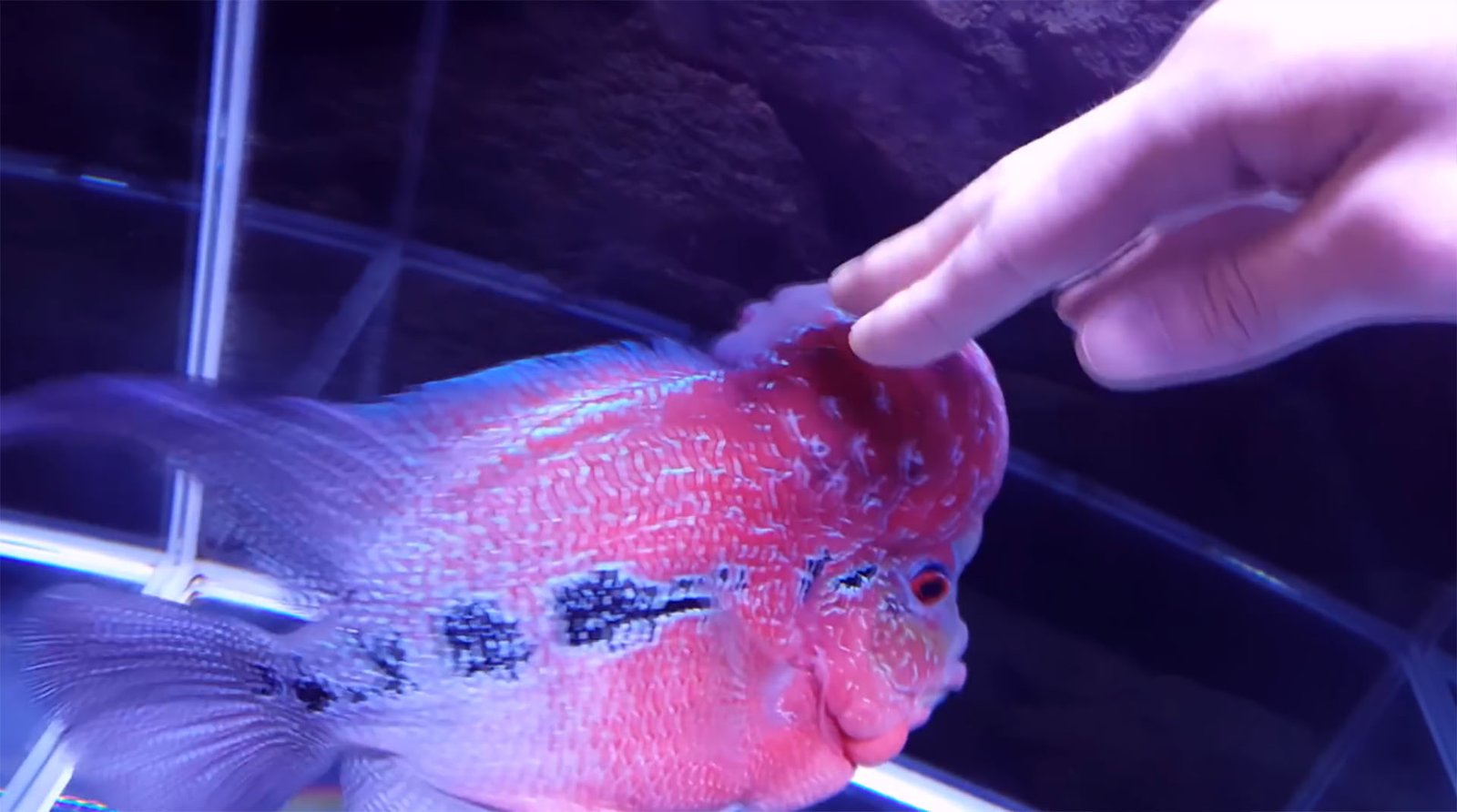 When you are trying to keep a pet, you would certainly like to know the guidelines and safety regulations about the pet. Depending on the type of pet and the animal traits, there are some things the pet owner must know. Even if you are petting a fish that will spend all of its time in the water, you still must know if it is safe for you and how it’s best maintained. Flowerhorn fishes are much famous as good luck bringing fishes. But how good the good luck charm is going to be for the owner is a question for many.

Why exactly the fish is dangerous, and how to handle it the best must be understood if you are seriously interested in petting the fish for good luck or just home décor.

Why the Flowerhorn Fish is dangerous?

The Flowerhorn fish is considered dangerous. And there are some strong reasons behind it. The fish has some such traits in it, which makes it dangerous for other fellow fishes, and other Flowerhorns too, and definitely for the people handling the fish. Conditions really do apply to that.

Actually, the Flowerhorn fish is a hybrid fish. Its name is Flowerhorn Cichlid, and it’s the hybrid of American Cichlids. The fish was bred in 1993 in Malaysia and Thailand. It’s actually genetically built to be aggressive. Being a hybrid it carries traits of its parents. And the American Cichlids also are somewhat aggressive. But this aggression has got magnified a few more times in case of the Flowerhorns.

They already have a bright and aggressive looking body color, which is also a factor of dominance. Their head is a bulging dome-shaped and that is why these fishes are also called Warships in Japan. This strange shape of the head, along with the vibrant pinkish red body color, black stripes and blue shining stripes on the body, all comes together to give the fish an already dominant look. This look is genetic just like its nature. Nature is aggressive too.

Flowerhorn fishes do not like to be touched, poked, or irritated. They like to stay on their own, secluded, and in their own mood and rhythm in water. Often Flowerhorns have been seen to swim in water alone. Forget aquariums; if they are traced in bigger water bodies, than also this trait gets exhibited. Many Flowerhorns, which are actually not nature-made but manmade fishes, were released in the open nature in seawater in different parts of the world. And then they were traced and tracked, and their behaviors were also noted. These things got recorded as part of scientific projects. And what was found in such searches were interesting. Flowerhorns do not swim with other shoals of fish, and neither do they like to get in close proximity to other shoals of fish. In fact, they maintain a safe distance from other fishes and do not like others in their territory. In other words, this trait is simply called territoriality.

The Flowerhorn fishes are strongly territorial. They mark their own territories in the open sea, and also in the small aquarium they are in. This means, wherever you put the Flowerhorns, you will see them mark their own territory always. And when they find others intruding into their space or territory, they simply do not like and tolerate. They protest against such intrusions with aggressive bites and dashes and pushes. Their body language and movement towards the intruding body immediately changes and can be noticed. This aggressive nature of the fish actually makes it dangerous, because it has sharp strong teeth too.

The Flowerhorn fish has sharp strong teeth. They can bite really well, and instantly bites. Their response is quick, and if they do not like something they will instantly attack. That is why when they are angry or irritated at any intrusion, or perhaps competition with other fishes, it would simply attack, push, bite and snap. And that is what makes them dangerous.

This applies not just to other fishes and objects, but also the human pet owners who keep the Flowerhorn fish at their homes. The human pet owner who keeps Flowerhorns in their homes must not take chances with the fish. Dipping hands or fingers in the water of the fishbowl or jar or aquarium can be quite dangerous and costly at times. If the fish is still not friends with you, it will protest, get angry, and just bite on the flesh right away. The bites are pinching sharp and can be hurting and dangerous. The bites of the Flowerhorn fish has been compared with the bites of Piranha, which is another flesh-eating fish found in inland water bodies and rivers. And the Flowerhorn has similar aggression and body language and biting speed and intensity, thereby actually making it dangerous for those pet owners, who still have not got accustomed with the fish.

Also Flowerhorn fishes do not like competitors. If you by chance keep two male Flowerhorns together in an aquarium, they are surely going to fight, and in many cases, either of the two will be alive and the other will be dead. Such is their aggression, that even the partner female fish or male Flowerhorn gets attacked often by the jittery male. And you really can help the female by putting a transparent guard, screen or barrier in between the male and female fishes in the aquarium. That is the safest thing you can do to keep both in good health.  And in case you plan to keep more pairs of Flowerhorns in an aquarium, make sure you accommodate them in a quite big aquarium, where the pairs, especially the males, get the space to mark and guard their own territories and doesn’t have to intrude into the other pair’s territory.

Is it safe and good to keep Flowerhorn fishes?

Yes it is still safe and good to keep Flowerhorn fishes at home or office. Here are some of the strong reasons you should still keep it:

The brightly colored fishes look charming. They can instantly elevate the mood of the owner and people seeing it. You really need not touch the fish or poke it to make fun of having the fish nearby. Just watching it swim and active is great. The bright pinkish red color with blue and black stripes makes it a treat for the eyes.
The fish is considered a lucky charm to bring good luck to its owner and to the home where the fish is. For this, the fish must be kept at the southern corner of a room. East is always a favorable position to keep the aquarium of the fish.

The years 2004 to 2024 are considered the most favorable time to keep this modern Feng Shui approved lucky charm fishes at home. The owner will get prosperity, money and good luck.

The Flowerhorn fish needs a very nice decorated lifelike environment to strive better. The more you decorate an aquarium with colorful pebbles and plants, the better for the fish and its mood. And when the fish itself is in a contended good mood, it will radiate this happiness.
In short, the Flowerhorn fish is a magnet to catch all positive energies and diminish the effect of negative energies. That is why it’s a great charm, and yet stored at homes even after its aggressive nature.

What to feed to the Flowerhorn fishes?

They feed on live fishes the best. They love the fresh flesh of live small fishes they are also fed earthworms and wax worms. You can give it a dry feed made from fishes if you cannot get fresh fishes for it.

Is there any relation of the color of a Flowerhorn fish with the luck it ensures?

Yes, the Flowerhorn fish ensures good luck because of its vibrant bright color. The color has a deep relation, and also the well being, health, and mood of the fish has deep relation with the lucky charm it offers. To keep it at its best health when the body color will also stay bright and great, the fish must get a good environment in the aquarium, fresh water changed every 2 to 3 days and healthy fish feed.

How big can a Flowerhorn fish grow?

A Flowerhorn fish can grow up to 30 cms. And hence you need to get a big sized aquarium for free swimming of the fish. The fish cannot be kept in a small confined space owing to this size of a matured big fish. And you must maintain an average big aquarium even if you are keeping just one fish.